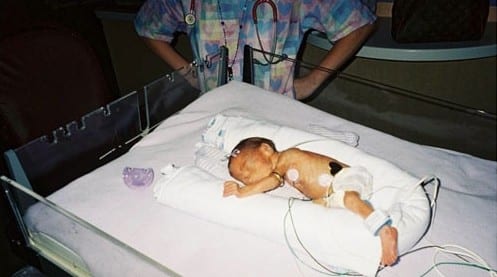 More than 1,100 families from across North Alabama enter the doors of our Regional Neonatal Intensive Care Unit each year. They are fearful, uncertain, and sad as this was not the happy birthday they had planned for their child. Most people do not really know about the NICU until their child needs the lifesaving care its team and equipment can provide. Seventeen years ago, I was the same way before our lives were changed by the premature birth of my girls.

I vividly remember my daughter asking me when she was younger, “How small was I when I was born?”

Knowing that pounds and inches mean nothing to a child, my husband said, “You were so small, my wedding band fit around your arm.”

Ann Catherine’s eyes darted from Chris’ wedding band secured snugly on his finger to her own arms and said, “Wow.”

The next day, she saw the proof. The picture taken when she was just a few days old showed the shiny, gold band dangling from her arm. She couldn’t believe it.

My heart started that familiar ache and I thought about all of the things she couldn’t see in that picture.

Like the fog of grief that surrounded me. The helplessness I felt watching total strangers care for my child. The constant worry of what the future would hold for her and for us. Those are the things she’ll never understand.

Ann Catherine has a twin. Her name is Melissa. The two were born 14 weeks early on June 1, 2005, at Huntsville Hospital for Women and Children. They were immediately taken to the third floor, which is home to the Regional Neonatal Intensive Care Unit, more commonly called “the NICU.” Both were incredibly sick and frail, but Melissa was the most critical. Complications in the womb meant her lungs weren’t fully developed and she weighed only one pound, nine ounces. Ann Catherine was the bigger of the two and weighed one pound, 15 ounces.

A couple of hours after they were born, my husband was called from my bedside to the NICU. I knew in my gut that something was wrong. Soon after, my nurse took me there. The doors to this unfamiliar place opened and, from my hospital bed, I saw Chris standing at the end of the room. As we got closer, I realized he was holding one of our babies and I knew it was Melissa. He held her in his big, strong arms with tears streaming down his face as he looked at me.

“I’m so sorry,” he cried. I had never seen him cry before.

He handed her to me and I looked down at this beautiful creature, so frail and so tiny, with a head full of dark, black hair. She had been safe and secure in my tummy just a few hours ago. How had this gone so unbelievably wrong?

It’s hard to put the emotions of that moment into words and I won’t even try. I told my daughter goodbye. I told her how much we had prayed for her and wanted her, and how sorry I was that we couldn’t do more to save her. And I told her how much I loved her.

The days that followed were the worst days of my life. Nothing prepares you for losing a child. I wondered how I would ever laugh or smile again. I didn’t know how to move on.

After much searching and praying, I got my answer.

Melissa was gone and, as badly as I wanted to, I couldn’t bring her back. But Ann Catherine was alive. And not only was she alive, she was in intensive care struggling for every breath she took. She needed her mommy.

I knew this was what Melissa would want. She would want me to pour my love and my time into bringing Ann Catherine home. Melissa had fought so hard to live, but her complications were too extreme to overcome. The best way I could honor her memory was to do all I could to help Ann Catherine live. I began to move forward. It was the first step in the healing process for me.

There’s no question Ann Catherine needed us. She was still so sick and small. We resolved to take it one day at a time.

The NICU journey is full of milestones. We rejoiced at any piece of good news, knowing it meant we were that much closer to bringing her home. Our lives revolved around visits to see her. We would sit at her bedside and whisper in her ear. When she was ten days old, I was allowed to hold her for the first time. The wait was excruciating, but the payoff was all I had dreamed it would be. It was the best day of my life.

Then 68 days after our ordeal began, we brought her home. We left the NICU full of gratitude for the nurses and doctors who had taken care of her, and ready to start our new life.

Months after settling into our new normal, my husband felt compelled to turn this tragedy into something positive. After months of praying for guidance, we made the decision to start the Melissa George Neonatal Memorial Fund at Huntsville Hospital Foundation.

Melissa’s Fund, as we often call it, exists to make life better for babies in the NICU. The money is used to purchase lifesaving equipment. We also purchase supplies for memory boxes that are given to parents whose children pass away in the unit and we help fund a support group for parents.

Melissa’s Fund has raised more than $4.2 million for the Huntsville Hospital NICU since 2005, but it’s not because of our family. It’s because of the generosity of people in this community who have given so freely to make life better for these precious babies and their parents. We are so blessed to live in a community that believes in giving back.

17 months after we said goodbye to Melissa, God sent us our rainbow after the storm. Lily Baker came into the world completely healthy and without complications. She brought laughter back into our hearts. She helped us heal in ways she will never understand.

We are so incredibly blessed. Yes, we carry scars and wounds, but we refuse to just go through the motions of life. We choose to live.

How You Can Help Melissa’s Fund

Huntsville Hospital Foundation’s annual Miracle Bash and Swim for Melissa events are this summer and benefit the Melissa George Neonatal Memorial Fund. The Foundation counts on the money raised to fund the latest and greatest that the Neonatal ICU needs. This year’s proceeds will literally breathe life into these fragile babies by funding high-tech respiratory equipment.

You can help make this possible by joining the fun!

This post was originally published in 2013 and has been updated with new information and republished.

Guide to Pregnancy & Childbirth in North Alabama
Is It Baby Blues or PMD? Know the Difference
Caring for High Risk Pregnancies in Huntsville

Climb into fun at McGucken Park in South Huntsville

Spend your spring at Burritt on the Mountain