One of North Alabama’s favorite family parks is getting a much-needed makeover! Kids Kingdom, located in Dublin Park in Madison, was built 25 years ago and the wooden structure is in desperate need of replacement. The typical lifespan of a wooden playground is about 15 years.

Kids Kingdom: Looking Back & Ahead

The firm that originally built Kids Kingdom came out to assess the playground, and quoted $400,000 to repair it, which would extend its lifespan by 5-10 years. The other option was three times that to replace the whole thing.

Around this time, the Madison City Disability Advocacy Board had contacted the Parks and Recreation Department and asked for an inclusive playground to be built. Alfred thought, “Why not kill two birds with one stone?” and rebuild the entire playground to be inclusive to accommodate kids with a variety of disabilities.

Game Time, a vendor out of Ft. Payne, AL, was chosen to design the project. The new playground will span over 17,425 feet. Naturally, Madison residents had lots of questions (and opinions!) about the future of such a beloved play space. Organizers of the renovation efforts put together a FAQ series to help answer some of those questions.

It Takes a Village to (Re)Build a Playground

Multiple community groups and leaders have led the fundraising efforts. Madison Visionary Partners has already raised over $500,000 for the project and is still fundraising. In fact, last October, hundreds of Madison teens who played there when they were young returned to volunteer at the Haunted Kingdom event that raised almost $10,000 for Kids Kingdom improvements. The City of Madison is also a major contributor to the renovation project. The total cost for the playground project is expected to be around $650,000.

In addition to the playground replacement, other improvements are also in the works. Those include fixing drainage issues in the park as well as expanding family restrooms to be more inclusive.

Alfred expected the project to be completed over the winter, when the playground is used less due to weather, but the pandemic and supply chain issues have delayed the delivery of equipment, which are now expected in early to mid April of 2022. “The timing is not optimal,” said Alfred. “We will experience a little bit of pain due to the delay, but in the end we believe everyone will be happy.”

One local Boy Scout, Andrew Gohlich, is doing his part to preserve the history of Kids Kingdom during the renovation. He was approached about creating a Tribute Tower at the new park for his Eagle project.

Gohlich started scouting about three years ago. Both his brother and father are Eagle scouts and he wanted to keep the tradition going. He particularly likes camping and volunteering for service projects in the community. “It’s nice to see something, to do something to make it better,” Gohlich said.

When Gohlich was approached about a potential Eagle Scout project at Kids Kingdom, he jumped at the chance. “The purpose of an Eagle Scout project is for a scout to demonstrate what they’ve learned on their path through Boy Scouts, and it’s where they demonstrate the leadership they’ve attained and help the community,” Gohlich said. Scouts must plan, develop, and show leadership to others in a service project to benefit the community.

Climb into fun at McGucken Park in South Huntsville

The idea was to construct a tower similar in design to the towers in the old Kids Kingdom playground. The tower would serve to commemorate the history of the park and include several features from the old playground, including the clock and the old plaques. “I know the clock and a few other things like that, we’re going to add them on the tower after fixing them up, since they’re kind of old,” said Gohlich. “And some of the old plaques, since there’s a lot of businesses and people that donated a lot of money in the past to help build the old park.”

Help Add to the History of Kids Kingdom!

In addition to preserving some elements of the old Kid Kingdom playground, Gohlich plans to include memories from the community in the tower design. Gohlich is currently collecting memories of Kids Kingdom from members of the community. “It’s going to be like a storyboard of the creation of the park to now,” Gohlich said. “I was hoping if anybody has any history of the park written, or photos of it being built, that would be very helpful.”

Gohlich has run into several challenges while planning his project, mainly lack of resources and money. “I’m in a small troop, and we don’t have enough people to actually build the tower. So we’re relying on Parks and Rec to build the tower, then we’re just going to go back in and add all of the features from the old park,” he said. The construction delays have also affected Gohlich’s tower project. But he is optimistic that once complete, the Tribute Tower will be quite nice.

If you’d like to submit a memory, you can fill out a card with your thoughts and leave it in the drop box Gohlich has installed at Kids Kingdom. You can also fill out a Google Form with your memories here. If you have any questions about the project or would like to contribute photos or written history of the park, please email Troop204Madison@gmail.com.

You can find out more about the park plans at GoBuildaKingdom.com. 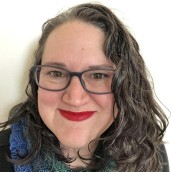 Melissa Davison is a former Youth Services Librarian turned Stay-at-Home-Mom of 2 boys and 1 girl. Married to her high school sweetheart since 2001, she moved with her family to Madison in 2013 from North Carolina and loves exploring her adopted home. When she's not volunteering with Cub Scouts or the PTA, you can find Melissa drinking caffeinated beverages, knitting, or trying to work her way through her massive To-Read list.

Spring Train Rides in Huntsville Your Kids Will Love