Based on the beloved children’s book by William Steig, then the awesome Dreamworks movie, everyone’s favorite big green ogre is headed to Huntsville! Independent Musical Productions invites your family to see these beloved characters come to life on stage – Shrek, the Musical is coming to the Rocket City!

After being mocked and feared his entire life by anything that crosses his path, Shrek retreats to an ugly green swamp to exist in happy isolation. Suddenly, a gang of homeless fairy-tale characters – Pinocchio, Cinderella, the Three Pigs, you name it – raid his sanctuary, saying they’ve been evicted by the vertically challenged Lord Farquaad. 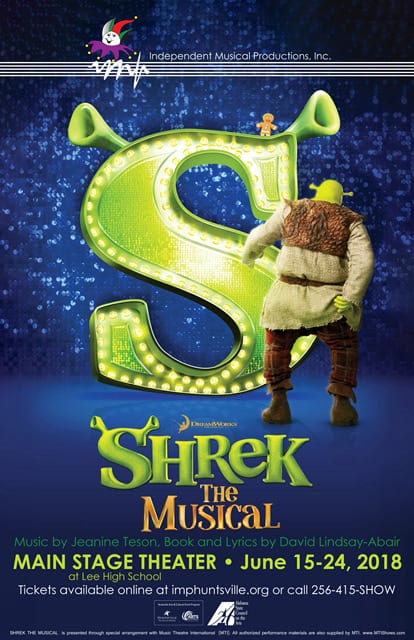 So Shrek strikes a deal: I’ll get your homes back, if you give me my home back! But when Shrek and Farquaad meet, the Lord strikes a deal of his own: He’ll give the fairy-tale characters their homes back, if Shrek rescues Princess Fiona. Shrek obliges, yet finds something appealing – something strange and different – about this pretty princess. He likes her. A lot. But why does she always run off when the sun sets?

Shrek the movie was a must-see. And so is the Tony Award-winning Shrek, the Musical. It’s proof that beauty is truly in the eye of the ogre. And proof there’s more to the story than meets the ears.

By David Lindsay-Abaire, (based on the book by) William Steig, with music by Tony-award winning composer Jeanine Tesori
Directed by Vivienne Atkins & P.J. Sligting; Assistant Directed by Dan Pawlus

Shrek the Musical Presented by IMP

Want to win four tickets to go see, Shrek the Musical? Just follow the directions in the box below – there are several ways to enter to win! We’ll draw a winner on June 12th.
a Rafflecopter giveaway

Step Back in Time at Burritt