Sifters are available to guests to be borrowed.

Closer to home, fossils can still be found at Creekwood Park in Huntsville.

Guests may also opt to go fossil hunting with a simple colander.

An uninvited guest can also be found in the creek at W.M. Browning Cretaceous Park.

Kids will love the adventure of sifting through the water and rocks for fossils.

With the right amount of luck, shark teeth like this one can be found in the creek at W.M. Browning Cretaceous Park.

Guests will also enjoy exploring the creekside and the surrounding areas.

Guests can grab a sifter to borrow before making the short trek to the creek.

There are shaded areas to take breaks and rest around the park.

If you have a child that enjoys splashing in creeks and also loves fossils, I have not one but two suggestions for a Spring Break adventure. The first one is farther away, more physically intensive, and will yield fewer results, but the awesome factor may make it worthwhile: The W.M. Browning Cretaceous Fossil Park in Northern Mississippi. The other is right here in Huntsville, and I guarantee easy results: Creekwood Park.

The fossil park is located in Baldwyn, Mississippi. It is approximately a 2.5 hour drive southwest from Madison. The new sign is not visible from the main road, but Google maps will lead you to it. The sign gave me a chuckle since it looks just like a gravestone. I guess that’s fitting for a fossil park. Apart from the gravestone, the park is not fancy. It doesn’t even have an official website. It consists of a small dirt parking lot and paths that take you down to a creek. These are muddy and slippery when wet, but we won’t discuss how I know this or the bruise on my arm. I learned of this place a few years ago, and I knew it was a must-do activity since my child loves sea creatures. He especially loves unusual and prehistoric sea creatures.

Let me back up a moment. Sea creatures? Yep, sea creatures. Alabama and Mississippi were once under a shallow sea, and there are sites containing marine fossils across both states. As a teenager I had a week-long paleontology adventure through the Alabama Museum of Natural History. I camped out, bathed in a pond, and hunted for fossils in Greene and Hale counties. I found part of a large prehistoric turtle, some tail bones of a Mosasaur (that large, prehistoric marine lizard featured in Jurassic World), and lots of prehistoric shark teeth. I’m eager for my son to be a bit older so I can take him on a full-blown paleontology dig, but for now we can take day trips to fossil hunt.

My family drove over to the W.M. Browning Cretaceous Park for the first time last summer. The park is known for its prehistoric shark teeth, and what kid (or grownup), wouldn’t think finding a prehistoric shark tooth is awesome! I’ve seen pictures of people holding a handful or two of these teeth after their hunts, and I was determined that we would bring back a collection too. I meant business. I went to the hardware store and purchased a short-handled shovel and a garden trowel with a deep scoop. We borrowed one of the large sifters made of wood and wire mesh that are available at the park, but that was too much effort for the slim returns we were getting. We learned it was easier and thus more fun to just use garden trowels and colanders, and we were yielding the same results.

After exploring, sifting, and splashing for a couple of hours, we had only one shark tooth. We had fun and weren’t coming home empty handed, so we were content. The tooth is most likely from a Goblin Shark. Those are still alive today, and are one of my son’s favorite sharks. We also brought home a fossilized snail, a rock with an imprint of what looks to have been a shell, and something I haven’t yet identified. It may be a broken tooth from a shark or other Cretaceous-era fish.

Something found me, too! A leech. A big one. I thought I had a leaf on my foot because there were brown leaves shaped like this leech in and around the creek. When I went to brush it off, it didn’t move, and that’s when I discovered something fat and squishy. I absolutely had a moment of pure horror, but then I calmed down and took some photos before removing it and tossing it back into the water. It wouldn’t pull off easily, so I used my thumb nail to scrape where it was attached. It didn’t hurt and no other harm was done. My kid thought that was as awesome as the shark tooth, and truth be told, I did too.

If you want to make the trip more substantial, there are two quick stops along the Natchez Parkway to explore. At Bear Creek Picnic area, there are tables and benches for a picnic and plenty of room for kids to run around in the grass. Just walking along the beach at this spot can be an adventure. We felt we had been transported to another world, because instead of soft sand or rocks, this beach is covered in large mussel shells.

Near the Mississippi and Alabama border, you can stop at the Bear Creek Native American mound. It’s directly beside the main. There is a small parking lot and informational signs.

If your family is seeking an even longer adventure in that area, you can stay a few days at Tishomingo State Park and Campground, which is just 30 minutes this side of the fossil park.

If you want to have a watery fossil adventure and can be satisfied with just the thrill of the hunt, the W.M Browning park is something I suggest doing at least once.

What to know before you go:

There are no bathrooms or portable toilets at the park, but the town of Baldwyn is close. There is a Subway and a local pizza place about 5 minutes away. Bring colanders and garden trowels with you for hunting, water and snacks, and since it’s a messy business, also bring towels, wipes, and a change of clothes. There are shady spots in and around the creek, including under an overpass.

The fossil park is open to the public but is privately owned. The owners request that visitors do not collect fossils for commercial gain. To maintain the area, only dig and scoop debris (sand, rocks, and hopefully fossils) from within the creek and not from the shore or bank.

Open sunrise until 30 minutes after sunset

Officially a Huntsville park with a Madison address, Creekwood Park has a lot to offer. A playground, dog park, disc golf course, a creek that’s great for splashing and swimming (for people and their dogs), and a greenway for walking, biking, or skating. Less well known is that it’s also a great fossil-finding site. I use finding as opposed to hunting, because you won’t have to do much hunting (no shovels, trowels, or sifters needed) before one is in your hand.

The common fossils here are crinoids. They may not be as exciting as shark teeth, but they are plentiful, can be found quickly, and don’t require a lot of effort. They can be found along the shore and bank, so getting wet also isn’t necessary.

Crinoids are marine organisms related to sea urchins and starfish. They resemble plants more than animals and are also known as sea lilies. They are still found in oceans today, but the fossils you’ll find at Indian Creek lived 300-400 million years ago.

If you’re standing among the rocks at the creek wondering what to look for, think about the hardware store. The part of the crinoid you’ll be finding is the stalk, which resembles a screw. A white, tan, or brown screw. I’ve never found a complete stalk as they were relatively fragile, but pieces from 1-3 inches are common. The stalk is a column of stacked segments, so you may also find individual segments. These resemble washers. You can run a string through them and turn them into beads depending on how thick and sturdy they are.

The crinoid fossils became mixed in with the limestone bed of the creek so you may find rocks with signs of crinoids: Imprints, holes, and even pieces of crinoids embedded in rocks.

What to know before you go:

The park has facilities, including bathrooms and a water fountain. There is full sun in much of the park, but plenty of shade can be found along the creek.

Taking crinoids from the park is permitted by Huntsville Parks and Recreation. They request that visitors do not significantly alter the creek bed, shore, or bank (by digging, for instance). 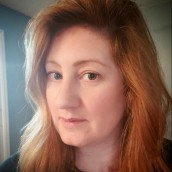 Heather Morgan is from Enterprise, Alabama, but she traded the allergies of the coastal plain for the allergies of the Tennessee Valley. She is a former outdoor environmental educator who enjoys walking in the woods, splashing in creeks, and searching for insects, snakes, and other critters. When at home, she spends more time outside than in, especially in her pool or on her back porch where she can keep an eye on her bird feeders and her gardening fails. She and her husband moved to the Madison area 18 years ago after meeting at the University of Alabama. They, along with their 9-year-old son Luke and 13-year-old German Shepherd mix Anni, moved into Madison City proper in 2020. What Heather likes most about the area is the overall kid friendliness, the schools, and the abundance of natural and other green spaces. When she’s inside, she can be found cooking, reading nonfiction, daydreaming about international travel, and watching broody, British detective shows. She is a stay-at-home mom and Co-founder of I Vote Madison, a non-partisan voter engagement organization.