Caving is a good idea anytime, but especially in the summer when temperatures soar into the 90s. Mom’s car thermostat reached 104°F yesterday! Cave temperatures range from the 50s and 60s ALL YEAR ROUND. It feels a bit chilly, but refreshing. You can see lots of speleothems, which is a fancy way of saying rock formations, like stalagmites, stalactites, soda straws, columns, popcorn rock, gypsum flowers, and much more.

Even if caves are dark; there are still creatures that live there. I’ve seen cave crickets, salamanders, crayfish, blind fish, and bats. You don’t see cave creatures in all caves, especially commercial caves because they don’t like the lights and the disturbance from people. You never know though. You just might get lucky.

Caving in North Alabama is Awesome!

There are lots of commercial and wild caves in and near North Alabama because there is a lot of limestone. Let’s focus on commercial caves here, but if you like adventure visit my blog Yonder Girl to learn about WILD caves. Most caves have a few things in common. First, they are naturally dark. Second, cell phones get no signal inside of caves. Third, they are very delicate environments. Remember: leave no trace behind so other people can enjoy. Definitely, don’t touch the formations.

A commercial cave is a cave that is available to the general public for guided tours. They’re more accessible than wild caves because they are easy to get to, get through, and get going! At the caves, they have visitor centers with plenty of parking, restrooms, and a gift shop. They are great for beginners because you just need to stay on the path. Some are even accessible to people with disabilities.

When you arrive, the first thing you do is get tickets. They sell tickets, so the workers are paid and able to maintain the property where the cave is located. Next, meet your guide who will lead you through the cave and tell you about it. If you need special gear, it is usually provided as part of your ticket price. You will want to dress in layers and wear grippy shoes. Don’t wear high heels. Always make sure you wear clothes and shoes that you don’t mind getting dirty.

Here are some nearby commercial caves you can go and experience.

Located in Kentucky and totally worth the drive, Mammoth Cave is the longest cave in the world! Right now, more than 400 miles have been explored. However, this could potentially be a 1,000 mile long cave system! That distance is like flying from Huntsville straight to Montreal, Quebec in Canada! There are many tours available, including a wheelchair accessible tour. My favorite tour is the Great Onyx Lantern Tour because there were fossils and gypsum feathers. Other tours I would recommend are Cleveland Avenue (gypsum snowballs) and Frozen Niagara (cool formations).

Cathedral Caverns is the largest decorated cave in Alabama. The cave tour lasts 90 minutes and golf carts are available for people with disabilities. The tour starts at the gigantic entrance. While on the tour, you will see different rooms or sections in the cave. The coolest formation is also one of the largest stalagmites in the world; it’s called Goliath. Other highlights of the tour are the frozen waterfall and stalagmite forest.

Yonder Girl Tip: You will get the opportunity to experience total darkness because they turn off the lights for a minute during the tour. It was so dark I couldn’t tell if my eyes were opened or closed.

While Rickwood Caverns is not as large as Cathedral Caverns and the tour is shorter, it is still a nice cave to visit. This is not for people with disabilities because of the steep stairs all around the cave, including 110 stairs at the end that went straight up. At Rickwood, there is a variety of odd-shaped formations all over the cave. If you use your imagination, you can see an angry octopus and a bunny amongst these formations. We also saw a crayfish, but this one was alive! It was as big as my hand!!!

Yonder Girl Tip: At the visitor center, there is a swimming pool. If you want to go swimming, bring a swimsuit, towel, and sunscreen. 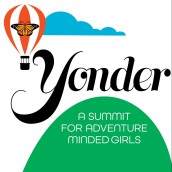 Kailani, trail name Yonder Girl, is an avid hiker, nature lover, and sometimes photographer. She spends her hours after school drafting and writing... all while being a normal 4th grader with friends, homework, and weekly spelling and vocabulary tests. She blogs about her travels and adventures in hopes of inspiring other girls to love being outside as much as she does. Learn more at Yonder Girl.

Escape the Heat in Cathedral Caverns

30 Things to Do This Christmas in Huntsville & North Alabama

Learn to Sail at the Muscle Shoals Sailing Club