When I was young, and I mean young, like maybe four or five, there was this public service announcement that used to run in Texas, where I was. It may have been a national campaign, but I was four or five, and who knew a world existed outside of my block? Not I.

Regardless, the campaign was about taking a moment before you take hold of your baby.

Because it was driving me crazy, I asked my husband if he had ever seen it, and sure enough, he had dug this up for me within minutes. He wins at Google.

So – admittedly – as a four year old, what I got out of this message was: DON’T BOIL WATER BECAUSE IT WILL BURN YOU. Seriously, that was it. I was terrified of boiling water until I was well into my twenties. To me, that was the real danger here: being scalded because that sneaky rolling boil will exact its revenge on you right when the phone rings.

I’m older and wiser now – though some would argue the latter – and I have had that commercial replay in my mind numerous times in the last week. And I thought that, as we march head-first into the holiday season, it would be a good time to remind parents that holidays often mean stress. And sometimes stress is tricky, and will sneak up on us.

This last week has been a rough one in my house. My husband and I believe ourselves to be superhuman, so we are currently involved in two different theatrical productions in town. My husband’s show was preparing for opening night, so we literally didn’t see him for a week. The two littlest kids were sick. And stuff at work was snowballing into something that had me working 12 hours a day, in between everything else. One night, we hadn’t gotten home until well after dark, the baby was crying, were we having cereal for dinner again, the dogs needed to be fed, and my work phone was going off non-stop.

I put a pot of water on to heat up a bottle and… I realized it. I was so stressed out that I just needed a minute. Just one minute that no one needed anything from me, and I could breathe, and maybe then I would be okay. At that very second, our middle boy was roughhousing with a dog and got “chomped” in the process, and started bawling. And that was it. I made sure he wasn’t bleeding, I made sure the baby was safe and secure, and I locked myself in the bathroom for just a minute. I gave myself a full two minutes in there, breathing deeply and evaluating my options and making a phone call. Then I steeled myself, unlocked the door, and went out to tackle what was waiting.

Admittedly, I am an educated, middle-class, well-employed, married white woman. I know that there are mothers or parents out there with stresses that I can’t even comprehend. Which is why I felt passionately that I talk about this month.

The Parenting Assistance Line is For Everyone

As we go into the season of Presents! and Elves on the Shelves! and Christmas Parties! and all of the stress and financial burdens and insanity that go along with said season, please remember to Stop. Take a Minute. Breathe.

The University of Alabama sponsors PAL for the state – a Parenting Assistance Line – that you can text or call 1-866-962-3030 from 9 a.m till 4 p.m., Monday through Friday, and speak with an experienced counselor. You can also chat online at pal.ua.edu. All calls are free and confidential. They look to offer genuine assistance, from things like discipline issues to health questions to managing stress. Their Facebook Page is pretty handy too.

I called them from my bathroom that night. I admitted that I was overwhelmed and alone and I was scared to be alone with the kids until I could calm down. They didn’t judge. They didn’t lecture. The lady I spoke with was kind and made me relax and she was exactly what I needed. And I felt better when I hung up. I felt capable of handling it, at least until I could get them to bed.

Know that this impartial and free option is available to you if you feel like you need a minute, but that’s not the only one. It’s always good to have someone you can call and ask for help from. Even if it’s just ten minutes that they stay with the kids, or maybe they bring dinner so you don’t have to worry about it, or maybe they come over and just keep you company. It’s hard to ask for help. I know this. But the temporary shame and discomfort of admitting that you’re human is so fleeting compared to the horror of what could potentially happen if you don’t stop and take a minute. 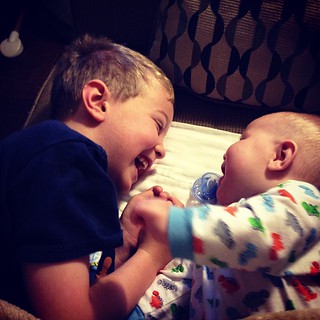 True story: when I left the bathroom, the boys were giggling happily and playing peek-a-boo. The dogs still needed to be fed, and YES, THAT IRONIC WATER WAS STILL BOILING ON THE STOVE, but I could approach it with a clear mind.

There is no medal at the end of the day for being the most selfless mother or parent, so remember to treat yourself well as we go into this holiday season. Know that you’re human, and you’re doing your best, and you know what? Your kids adore you for all that you do for them.

A Look “Inside Toys” at Earlyworks Children’s Museum in Huntsville

The Gift that Keeps on Giving: Self-Care for the Special Needs Parent