Donuts are a wonderful treat that most Americans are in love with! Don’t believe me, let Krispy Kreme’s Hot Light come on right now! People would almost wreck trying to get in line to those glazed confections. Why not avoid the long line and make some at home? Watch us do a baked version and you’ll see how easy it is.

Let’s get this out of the way first – Doughnuts vs. Donuts? “Doughnut” is actually proper, but “donut” is acceptable. If you look in older dictionaries, you’ll only find “doughnut.” However, the Merriam-Webster dictionary now lists “donut” as a variant of “doughnut.”

In a large bowl, mix the dry ingredients together (flour, sugar, salt, and baking powder). Set aside.

In a small bowl, whisk buttermilk, butter, and egg, and blueberry syrup together. Stir wet ingredients into dry ingredients and mix until just combined.

Place batter in large plastic bag with end cut off about ½”. Fill donut cavities about ¾” full and slam pan on floor or countertop to get dough to settle and bring air bubbles to the top..

Bake for 20-22 minutes until tops are lightly browned and when you push on donut it springs back. Let donuts cool in pan for 10 minutes before gently inverting pan and taking donuts out.

Enjoy! The donuts will keep good covered for about 2 days.

Wow your kids with your doughnut/donut knowledge!

RecipeJoes will be serving up hot new videos on ways families can spend time in the kitchen together the last Sunday of every month right here on RocketCityMom.com! 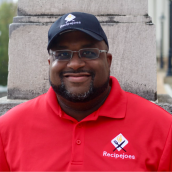 Cornelius Joe II is a food influencer with a family focus. He's a husband and father of two little girls, and they love all kinds of food in their household! Watch as he makes awesome recipes, tries new foods, and discovers amazing new restaurants. Follow their cooking adventures on the  RecipeJoes YouTube channel.