Many years ago, when I was pregnant with my first child, I had a discussion with my OB-GYN about my feeding choices. I remember expressing that I wanted to breastfeed, and this assertion hit him like a ton of bricks. He was elated and told me that I was making a great decision for my baby. While I was happy to get his approval, I couldn’t help but wonder why he’d been so shocked that I chose to breastfeed my child.

It was later that I found out the statistics regarding young, black mothers and breastfeeding. According to Hall et. al’s 2015 study titled “Racial and Ethnic Disparities in Breastfeeding,” African Americans continue to have the lowest rates of breastfeeding compared with all other racial/ethnic groups in the United States, and it is due to this disparity that drives the need for support groups and breastfeeding resources within the community.

I was so excited when I learned of Coloring Between The Lines, a breastfeeding resource right here in North Alabama that is committed to serving the minority and low-income community. As a mom of four, I cannot stress the importance of having a safe space to connect with people who are trained in lactation support, postpartum care, and what I like to call the fourth trimester. I had the pleasure of interviewing Kayla Bitten, Director of Coloring Between the Lines and I asked her several questions to get a comprehensive idea of the goal of the organization.

What is Coloring Between The Lines

Coloring Between The Lines (CBTL) is a community organization offering low-cost to free breastfeeding support to mothers of color in Northern Alabama through classes, support group meetings, and mommy meet ups. CBTL was actually started by a lactation counselor by the name of Sabrina Butler. After running the groups for some time, she decided to step away and felt that I was a great candidate to take over CBTL as my own. Since then, what originally started out as just a monthly support meet has now turned into classes, support meetings, peer-to-peer education, and more.

What inspired you to begin this organization?

As stated, I am not the originator, but I am more than positive that the inspiration for this organization is the same inspiration that drove me to take it on which is the lack of lactation support especially for mothers of color within the hospital and other infant feeding spaces like Pediatrician and WIC offices where, though a valid form of infant feeding, formula is suggested and pushed with very little knowledge, education, and support given to those mother who choose to opt in to breastfeeding.

What services do you offer?

Community centered breastfeeding education classes for every stage of breastfeeding, breastfeeding support meetings where questions can be answered and specific topics are chosen to discuss, and mommy meetups where CBTL mothers meet up to get to know each other and feel less alone along their breastfeeding journey.

What areas are you serving at this time?

How can the community support your organization?

The community can support us by offering breastfeeding supplies, monetary donations, donating space for our monthly meet ups, and spreading the word about who we are and what we are doing.

If you could sum up your mission in a brief statement, what would it be?

CBTL advocates and insists that accessibility of breastfeeding support and education is imperative to the progress of low-income mothers of color and their children through support.

Get to Know CBTL

Coloring Between The Lines will launch their new and improved website during Black Maternal Health Week which is April 11th through April 17th . Their Facebook page is the easiest way to stay abreast of all of the wonderful things that they are doing. Find upcoming meetings and events on their Facebook page. 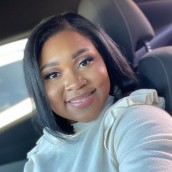 Latoya Binford was born and raised in Huntsville, AL. She wears many hats and often changes them out by the second - including wife, mom, teacher, writer, speaker, and blogger just to name a few. She's wife to Sidney, her high school sweetheart, and mom to four daughters, Jordyn, Lauryn, Carmyn, and Camylle! Her house is chaotic, loud, and dripping in girlitude. She is an alumna of AAA, Lee High School, and UAH, holding both a Bachelor's and Master's degree in Communication. She has many passions, but among the top are family, food, traveling, and writing. Her many adventures can be read about on over at The Binford Way of Life.

Finding breastfeeding support in the time of Covid-19