We were just outside of Bristol, south of Virginia when the caffeine began to wear off. Next to me in the car which we had purchased for the trip, was my partner and counselor Dr. Mommo. It was her idea to get a new family sedan before the big trip and her idea to leave at one o’clock in the morning so that the two tiny hitchhikers we had picked up eight years earlier may sleep through the better part of the trip. I had no such illusions, knowing full-well that they would acquiesce to our need for silence. So they sat, bleary-eyed, singing atonal tunes as white lines darted passed us in the dead of night. We had come up with the idea for this trip; a journey into the seedy underbelly of family picnics and tourist traps, over two months prior. Mommo had a need to see her parents and siblings, to reconnect with her past. I just rode along, knowing that Charm City held dark, beautiful secrets for me. And so we took off in the dead of night, two large travel mugs full of Colombia’s finest, phones full of music from a more hopeful time, two small children, and a heading of north.

The coffee was long gone and the lack of sleep was catching up with all of us. I was preparing to take the next exit when Mommo turned back to our progeny.

“Are you okay, sweetie,” she asked, unsure of the small passenger.
“I don’t know, Mommy,” was the reply.
“What’s wrong,” I chimed in, curious.
“This is barf country,” she said.
And with that, her stomach jumped out through her mouth.

The new car smell was gone. It is a smell all human’s long for, a strange amalgamation of chemicals intermingling with one another to make one of the most pleasing odors to our sinuses. It was replaced with the odor of half-digested apples and cow-tails purchased from that bastion of faux-southern hospitality, The Cracker Barrel. It was a place we stopped on every trip to the north, a place of familiarity on strange roads, where the eggs were the same no matter how many miles you travelled. It was there where Thing One asked if she could have cow tails. I knew, from our travels in the past, that her motion-sickness did not mix well with sugar, but I forgot this amidst the orgy of edibles before us. Now I could only listen as the car that Dr. Mommo co-signed with me was filled by the remnant of an eight-year-old’s sugared up dreams and the dashed hopes of getting that new car scent intact to Baltimore.

The dream was over.

With a trip full of an assortment of ups and downs, coffees and sodas, naps and screams, we made Baltimore in fourteen hours and no time to spare. The family reunion was a series of pats on the back, hugs, pinched cheeks, and excusing oneself to go to the bathroom. We didn’t stop much, as Things One and Two happened to be excellent travelers, just as happy with long silences as they were with the constant torrent of Beatles tunes Mommo subjected us to. The days of the family road trip were supposed to have died with the technological advances of travel: DVD players, video games, headphones, e-books. We were travelers of a bygone era, days of hot vinyl seats and static-crackled music, license plate bingo and I-Spy. Mommo and I never moved beyond those days, much to the betterment of the two little ones we travelled with. So, we arrived ready to be as far away from one another as possible.

And Mommo’s Daddo needed help with some yard work.

The yard was a collection of long-abandoned projects, started and left in various states of decay as life happened and children grew. Areas of the lawn hadn’t seen sun since Clinton was being impeached and grunge music was the next big thing. I decided this must change, as much for my mother-in-law who had been looking at disdain at those countless piles since Mommo and I first met, as for myself. It gave me a reason to fall into a traditional male role of lifting heavy objects while the women-folk worked on crafts and talked. Daddo and I didn’t talk much beyond a series of grunts. It was like going back to a simpler time that may or may not have existed, a time Archie and Edith Bunker sang of over the plunking of piano keys. And so I proceeded to move several hundred pounds of rotted wood and cracked posts, a fence that would never be built, finally taken to the dump where such things belong. We called it bonding, Daddo and I, though not ten words were spoken.

Everyone was happy, except for me. I was tired. Juan Valdez was calling.

We finally made it to DC after a traffic jams on a badly engineered beltway and a train ride where we almost entered back into “barf country.” Things One and Two showed no signs of slowing. The constant diet of pilfered sweets combined with the latte I let them split that morning assured that fact. I needed these two ready and excited for a journey into this den of iniquity. I did not inform them of this, for they still believed in the things these large marbled buildings with their strong foundations stood for.

So, here we stood in the lion’s den. They see lots of pretty buildings and paintings, but my adult brain can only see a cesspool. Perhaps I am too cynical. Or are they not cynical enough? A second sugar rush kicks in and they twirl in a fever of innocent dance. It is beautiful.

And, thus, the trip continues… 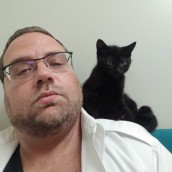 Benjamin Shapiro graduated from Washington College with a BA in Philosophy. He is a transplant to Huntsville from Baltimore, MD. Ben is a stay at home dad to two lovely daughters. He currently has a collection of poetry entitled "Dance of the Entwined Branches" available on Amazon. He blogs over at The Other Ben Shapiro.

Take the Kids to the Magic City: Exploring Birmingham

The Truth About Trips – Salt(y) Life vs Social Media