In an effort to show my sons and their friends that fun CAN be had without being “connected” I hosted a campout adventure!

A friend provided me with a tent – since this was my first time camping with the kids I didn’t really want to invest in a tent of my own. Plus, I didn’t want to go to a remote location. Most boys had never slept all night in a tent and I wasn’t sure if this would even work, so our camping adventure took place in my backyard.  All invitees were asked to bring their own sleeping bag and flashlight.
[sws_pullquote_right] Would I be calling moms at this point because I had scared their little first graders to death? Would the boys get wound up with fear and anxiety? This was, after all, a new overnight play date for all of them. [/sws_pullquote_right] Now the hard part, coming up with ways to entertain eight 7-year-old boys without using anything that had to be plugged in!  First I went to Lowe’s to buy a fire pit… how else would we roast marshmallows for Smores? That is an essential activity to any campout. For dinner, I kept it simple. I grilled hot dogs and served them with chips and juice boxes.

The little campers began to arrive about 5:30 in the evening. Before dinner they spent time getting acquainted with the tent by making room assignments (it had two bedrooms) and laying out their sleeping bags. They were entertained on the trampoline and running around in the yard with very inexpensive, yet totally fun Punch Balloons.

After dinner darkness had set in and it was time for a surprise. My neighbor helped me create a scavenger hunt for them. We kept it age-appropriate, yet challenging, hiding seven clues around the neighborhood which eventually led them to a Treasure Chest Of Excitement for boys! They were in first grade at the time and it was fun watching them take turns reading the clues. Sounding out the hard words was a team effort.

Once the loot was found, we made our way back home. They spent another hour playing with the army men, cars, silly putty and other miniature prizes that they just worked so hard for. About 9pm it was time for everyone to change into pajamas and the ghost story portion of the evening. This is the part I was not sure of. Would I be calling moms at this point because I had scared their little first graders to death?  Would the boys get wound up with fear and anxiety? This is, after all, a new overnight play date for all of them.

Boy was I surprised – the boys quickly changed and situated themselves in their self-assigned section of the tent. I requested that while I read, they settle down and listen. I began the book using my best suspense and scary voice, speaking quietly so they would have to concentrate to hear me. The tent was silent other than my voice. In amazement I looked up about 25 minutes into my reading to notice that everyone in the tent was sound asleep!  I’m not sure if I can credit the fresh air, the action packed evening, the fact that we “unplugged”, or a combination of all factors! At this point I considered my think outside the box idea a total success.

I have to admit I didn’t sleep in the tent with them – I really enjoy the comfort of my bed. I checked on all of my campers, made sure they were tucked in, turned on the porch light and left the back door open before I headed inside to retire to my bed.

Just as quickly as the boys fell asleep, with the first sounds of morning they were wide awake! At 6am to be exact I had trampoline full of energy!

I was afraid I might be getting a call from the neighborhood association regarding the noise ordinance, but I suppose since the night was quiet and uneventful my neighbors were able to overlook the early morning wakeup call. The night unplugged will go in my parenting guidebook as a success.

Have you hosted an unusual slumber party? Share your story in the comment section below – I would love a new idea for next time. 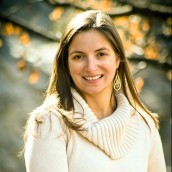